The Romanian Intelligence Service is headed by a Director, with the rank of Minister, appointed by Parliament at the proposal of the Romanian President. 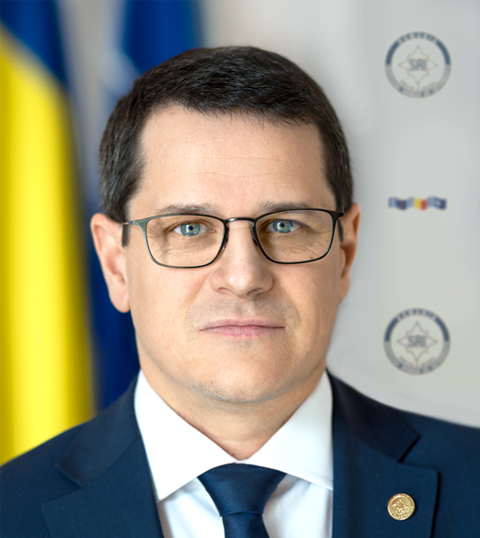 He was elected MP in the 2004-2008 parliamentary legislature, serving as secretary of the Committee on Defense, Public Order, and National Security (October 2005 - September 2008) and member of the Romanian Delegation to the NATO Parliamentary Assembly (Subcommittee on Security). After Romania’s accession to the European Union, he became one of the first Romanian MEPs (January 1st - December 9th, 2007).

In 2012 he was appointed Minister of Regional Development and Tourism, and subsequently won another MP seat following parliamentary elections at the end of the same year. During this term, he served as Vice-President of the Chamber of Deputies (December 2012 - September 2013) as well as member of the Committee on Foreign Policy (until February 2013), Committee on European Affairs (starting with February 2013) and the Romanian Delegation to the NATO Parliamentary Assembly (December 20th, 2012 - September 3rd, 2013).

His MP mandate ended on September 3rd, 2013, as he was re-elected member of the European Parliament (September 2013 - June 2014). He was reconfirmed as MEP in the elections held in May 2014, but decided to give up his seat after being validated as Director of the Romanian Intelligence Service by the Romanian Parliament.

He was born on October 27th, 1974 in Zalau, Salaj County. He is married and has one child.

Lieutenant General Razvan Ionescu is 47 years and has over two decades of experience in the Service. He graduated from the Faculty of Physics within the University of Bucharest and attended postgraduate courses at the Academy of Economic Studies with the specialization in geopolitics and geostrategy.

His academic background in the field of security studies was enreached by attending NATO Senior Executive Master at SNSPA and the Program on Terrorism and Security Studies (PTSS) organized by George C. Marshall European Center for Security Studies in Garmisch-Partenkirchen, Germany.

Throughout his career in Intelligence, Lieutenant General Razvan Ionescu held various positions, both in the central and regional units of the Service, where he had large scale operational successes in partnership with the intelligence services of the Euro-Atlantic area, on issues regarding Transnational organized crime, respecting the international regimes regarding weapons proliferation systems, international financial flows, migration and terrorism.

He was employed in the SRI with the rank of lieutenant and graduated as valedictorian of his initiation clase. He was promoted to Major General on the 1st of December 2017 and previous to his appointment as First Deputy of Director of the Service, led a central unit with activity in combating cross-border threats. In his activity he had an exelent colaboration with both internal and external institutional partners.

Before being appointed Deputy Director of SRI, Major General Cristian Bizadea was the Chief of Staff to the SRI Director.

Since his enrollment into the Service, he held various positions within the Directorate General for Counter-espionage: deputy chief of the Directorate, head of the analysis, operations and planning departments. In this capacity, he participated in operations conducted in cooperation with SRI’s domestic and foreign partners.

He coordinated and contributed to a large part of the SRI’s institutional transformation processes. In 2013 he earned a PhD in Sociology at the Bucharest University, with the thesis entitled “Extended Middle East – A Demopolitical Perspective”.

As a lecturer, he taught intelligence analysis and risk assessment courses at the Bucharest University and “Mihai Viteazul” National Intelligence Academy.

He graduated from the Faculty of Law at the “Lucian Blaga” University of Sibiu and earned a Master’s Degree in Communication and Public Relations at the National University of Political Studies and Public Administration of Bucharest.

He was born in 1976, in Bucharest. He is married and has one child.

He was promoted to the rank of Major General in 2020.

He participated in missions, actions, and complex operations carried out especially in the counter-espionage field, in cooperation with SRI’s foreign partners.

In 1996 he graduated from the Faculty of Psychosociology within the “Mihai Viteazul” National Intelligence Academy.

He is fluent in English and French.

Before being appointed Deputy Director, Mr. Major General Răducu Gheorghe-Stancu was the Head of the Directorate of Logistics.

He was promoted to the rank of Major General in 2020.

On October, 20, 2009 he was appointed the Head of the Directorate of Logistics (having Lieutenant General as corresponding rank).

On July, 1, 2008, he became Deputy Head of the Directorate for Procurement and Asset Management.

Since 2002, due to his exceptional professional achievements, he was promoted to chief of bureau, and on May, 15, 2006, he became chief of sector.

In 1992, he was admitted to the university study program of the Technical Military Academy on the places assigned to SRI. At the end of the 3rd university year, he was granted the rank of Lieutenant, and on May, 25, 1998, he was admitted at the Romanian Intelligence Service and appointed at the Logistics Directorate.

He is fluent in English.

He was born on April 5, 1973 in Targu Secuiesc, Covasna County. He is married and has two children.